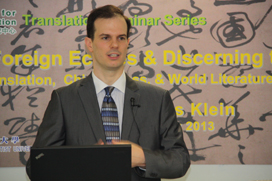 What constitutes the relationship between world literature and Chineseness? How has translation shaped Chinese poetry, and can translation be understood as at the foundation not only of world literature, but of Chineseness, as well? This talk will begin to answer these questions by demonstrating how Chineseness as an aspect of the Chinese poetic tradition is itself a result of translation. Looking at Chinese poetry’s negotiation with concepts central to translation – nativization and foreignization, or the work’s engagement with the Chinese historical heritage or foreign literary texts and contexts, respectively – I argue not only that Chinese poetry can be understood as translation, but for an understanding of the role of such translation in the constitution of both Chineseness and world literature. After contextualizing recent debates in the field of Sinology and translation studies, I will examine the work of Bian Zhilin 卞之琳 (1910-2000) and his implicit vision for a world literature able to merge the Chinese literary heritage with Western influence. Since debates around world literature, especially in Chinese literary studies, focus on the modern era, however, I shift focus with a discussion of the Tang dynasty (618-907), when China had earlier become highly international, even cosmopolitan, in a detailed look at the history of Regulated Verse (lüshi 律詩), describing not only its origins in Sanskrit but how it maintained associations with Buddhism. Following this, I consider the work of Du Fu 杜甫 (712-770) to understand how the canonization of his work nativized Regulated Verse through its historiography. I conclude with a reconsideration of the ethics of world literature and translation in determining our understanding of the local.

Lucas Klein is a writer, translator, editor, and Assistant Professor in the dept. of Chinese, Translation & Linguistics at City University of Hong Kong. With Haun Saussy and Jonathan Stalling he edited The Chinese Written Character as a Medium for Poetry: A Critical Edition, by Ernest Fenollosa and Ezra Pound (Fordham University Press, 2008), and he co-translated a collection of Bei Dao 北島 poems with Clayton Eshleman, published as Endure (Black Widow Press, 2011). His translation Notes on the Mosquito: Selected Poems of Xi Chuan 西川 (New Directions, 2012; for more, see http://xichuanpoetry.com) was shortlisted for the Best Translated Book Award in poetry, and he is at work translating Tang dynasty poet Li Shangyin 李商隱 and seminal contemporary poet Mang Ke 芒克.