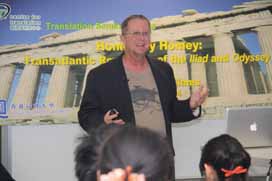 English-language and German-language cultures both claim the same shared classical Greek tradition. Even though knowledge of classical Greek is hardly wide spread, the Iliad and Odyssey are familiar to a wide audience through translations and other rewritings across different genres and media, from fiction to non-fiction, prose and poetry to film, stage, and the internet. Ideological and aesthetic considerations shape these rewritings within the particular national and cultural contexts. Rewriters may, for instance, pursue or eschew the performative aspects of the texts, cutting parts considered repetitive in modern prose or finding ways to stage parts of the text across continents. One might see in the texts a way to educate about PTSD or an avenue for addressing generational consequences of war. On both continents the texts also serve as the first great Story, to be retold and refashioned.

Scott G. Williams earned his Ph.D. in Comparative Literature at the University of Texas at Austin and a Magister Artium in Greek and Roman history and archaeology from the Universität Hamburg. He is Associate Professor of Germans Studies at Texas Christian University in Fort Worth, Texas USA, where he was named Honors professor of the year in 2009. He has published translations of over 20 contemporary German-language authors. He has written articles on, for instance, classical myth in Paul Celan and Christoph Ransmayr, concepts from translation theory and the image of classical Rome in post-1945 German-language Literature, and the application of translation studies concepts to one of William Faulkner’s short stories and its cross-cultural intertextuality. He is currently working on issues of translation and performance. He was president of the South Central Association for Language Learning Technology 2005-2007 and was a member of the Executive Board of the American Translation and Interpreting Studies Association 2011-2013.

Homer my Homey: Transatlantic Rewritings of the Iliad and Odyssey
Scroll to top