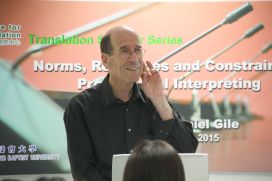 Interpreting has become a visible and attractive profession in some parts of the world, but many people know little about what it involves in its various branches above and beyond a good mastery of the working languages. Far from being ‘language converting devices’, interpreters constantly analyze incoming (source language) speeches and make decisions on what and how to formulate their target-language speeches. The efficiency and outcomes of such analyses and decisions depend to a large extent on their mastery of their working languages, but also on other factors, including but not limited to their perception of their role in the interaction between speakers and listeners, their encyclopedic (extralinguistic) knowledge, the conditions under which they have access to source-language speeches, including speaker-specific parameters, their cognitive skills, on effective reactions and perceived future reactions of the principals (the speakers and the users of their interpreting services) and of other stakeholders, including colleagues and recruiters.
These and other factors will be discussed, especially in the context of conference interpreting, media interpreting and signed language interpreting, with a number of examples.

Studied mathematics, sociology, Japanese. ESIT (Paris) graduate in conference interpreting (French, English, German). PhD in Japanese, PhD in Translation Studies (doctoral thesis on conference interpreting). Technical translator, then conference interpreter and trainer over more than 35 years. Research into translation and interpreting since the early 1980s, more than 200 publications, including Basic Concepts and Models for Interpreter and Translator Training and a book on translation which have been translated into several languages. Numerous lectures and courses given in various countries, with a particular interest in Asia. Guest-editor of a special issue of the Korean The Journal of Translation Studies on translator and interpreter training in East Asia (Seoul, October 2015). Founding member and former president of the European Society for Translation Studies. Currently Professor Emeritus, Universite Paris 3 Sorbonne Nouvelle. http://cirinandgile.com/DGCVEN.htm

Norms, Resources and Constraints in Professional Interpreting
Scroll to top