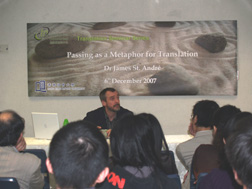 This paper aims to explore the possibility of using ‘passing’, a concept developed in cultural studies, as a new metaphor for translation. A brief discussion of the general importance of metaphors as a way of breaking out of old frameworks of thought will be followed by an outline of how different types of translation may usefully be mapped onto various forms of passing (straight passing, blackface, whiteface, slumming, drag, mimicry), and how this new metaphor encourages the reformulation of notions of what the translation process involves, what the role of the translator is, and what some of its social effects might be. The main examples will be drawn from Chinese-English and Chinese-French translation and pseudo-translation of the 18th-20th centuries.

James St. André was awarded a PhD in comparative literature in 1998 from the University of Chicago, after which he spent a year as postdoctoral fellow at the Graduate Institute of Translation and Interpreting Studies at NTNU in Taiwan before joining the Chinese department at NUS in Singapore, where he taught translation and intercultural studies for six years. In 2006 he moved to the University of Manchester, where he is director of the new undergraduate programme in Chinese Studies, as well as teaching and supervising MA and PhD students in translation studies. He has published several articles on the history and theory of Chinese-English translation in such journals as META, The Translator, and Target, and is currently working on a book manuscript on the topic of passing and translation.

Passing as a Metaphor for Translation
Scroll to top