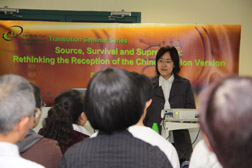 In the light of the descriptive and poststructuralist translation theories propounded by contemporary western translation scholars with regard to the reception of translation in the recipient culture, this paper attempts to explain an inexplicable phenomenon in Chinese Bible translation, which is considered irrelevant or simply being ignored in the prevailing approaches to Bible translation. It points out that while it is generally assumed that the Bible is the inspired Word of God and that the respectability of a biblical translation is directly related to the reliability of its source, the Chinese Union Version of 1919 occupies a canonical position in the Chinese Bible polysystem throughout the twentieth century despite the fact that it is based on the text underlying the English Revised Version of 1885, and that competing translations derived from more prestigious sources have emerged since 1970s. A plausible explanation for the phenomenon is therefore proposed through a descriptive understanding of the relatively insignificant role played by the source text in the reception of the Chinese Union Version, and a poststructuralist interpretation of the supremacy of the Chinese Union Version in relation to how the translation enacts the survival of the original through its mutation and transformation.

Chong Yau Yuk is Associate Professor at the Department of Translation, Lingnan University, Hong Kong. She has taught, researched and published on translation theory, Bible translation, literary translation, interpretation, and translation of popular cultural texts. She is the author of several Chinese books including Translation Studies: From Polysystem Theory to Deconstruction (2008), A Study of the Phenomenon of Authoritativeness in the Chinese Translations of the Protestant Bible (2000), and Mad Pursuit: The Menglong Poetry of China (1993) and the co-editor of a special issue of Chung Wai Literary Monthly on “Polysystem Studies” (Oct 2001). She has translated into Chinese Orthodoxy (1908) by G. K. Chesterton, Markings (1964) by Dag Hammarskjöld (translated from the Swedish by Leif Sjöberg and W. H. Auden), and a number of books and articles in the areas of literature, religion, philosophy, and social sciences.

Source, Survival and Supremacy: Rethinking the Reception of the Chinese Union Version
Scroll to top