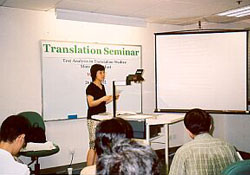 When the academic discourse on translation has widely recognized the importance of text analysis, we need to ask ourselves two questions further: (1) how a text can be analyzed, and (2) what a text will be analyzed for. Indeed, “text analysis” is more than a convenient haphazard operation. It embodies a system of methodologies that, dynamic in nature, can make our understanding of the various aspects of the translational phenomenon reliable as well as rigorous. The practice of text analysis will lend accountability to any “culture”-related claim or argumentation in Translation Studies. A text is analyzable from a variety of perspectives. An awareness of the growing concern with ideology (taken in its broadest sense) in Translation Studies and a personal interest in the relation of language to the mind combine to locate many insights in some cognitive-functional approaches to language and discourse studies in general – not only in terms of their view on language but also with regard to their methodology for language data analysis. This talk will primarily draw on the notion of profile/base organization proposed in cognitive linguistics (Langacker 1987 & 1991), in which regard an analysis of the opening paragraph of William Faulkner’s The Sound and the Fury and its two Chinese translations will be presented by way of illustration. Yet, text analysis in itself is a means rather than an end. The analytical result will turn out to provide a window on the general phenomenon of shift in translation (Cf. the notion of “translation shift” in Catford 1965). In the meanwhile, potentials of a text in shaping the mind towards some ideological pattern will become manifest, which, we will argue, has significant implications for a reconsideration of the issue of “effect” in Translation Studies.

Wu Qing is currently a PhD candidate in the Department of Chinese, Translation, and Linguistics, City University of Hong Kong. She specializes in Translation Studies, whose focus of interest has been with language and cognition. Prior to her research experience in Hong Kong, the speaker taught English as a foreign language in the Department of English, Beijing Foreign Studies University.

Text Analysis in Translation Studies: More than a Must
Scroll to top