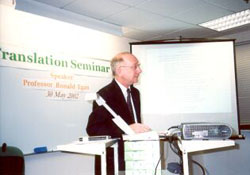 David Hawkes’ translation of the first eighty chapters of Honglou Meng 《紅樓夢》 (The Story of the Stone) is justly acclaimed as a masterpiece of literary translation from the Chinese. In this presentation, an attempt will be made to characterize the distinctive features of Hawkes’ methods as a translator. Topics to be discussed include his handling of poetry, puns, dialogue, textual variants, implicit meanings in the text, the psychological life of the characters, and the physical world of the novel. Hawkes’ published notebooks shed light on his approach, his engagement with the Chinese text, and his creativity as translator.

Ronald Egan is Professor of Chinese at the University of California, Santa Barbara, and Visiting Professor for the current year in the Department of Chinese, Translation, and Linguistics at City University of Hong Kong. His interests include Chinese poetry, aesthetics, and literati culture of the Song dynasty. He has taught at Harvard University, where he received his Ph.D., Wellesley College, UC Santa Barbara, and UCLA. He is the translator of selections of Qian Zhongshu’s Guanzhui Bian 《管錐編》(entitled Limited Views: Essays on Ideas and Letters by Qian Zhongshu), and the author of Word, Image, and Deed in the Life of Su Shi.