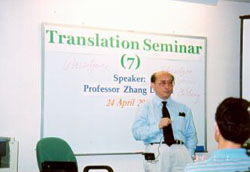 In the etymological sense, both metaphor and translation signify an act of transference, of carrying something across, and that basic sense should help us understand the nature of translation. I shall discuss a number of important theoretical and critical discussions of the problem of translation, and of translatability in particular, and I shall argue for translation not just as a technical issue of finding equivalence between languages, but first and foremost the necessary means of understanding and communication across the gaps of cultures, histories, and traditions.

Zhang Longxi received his MA in English from Peking University and his Ph.D. in Comparative Literature from Harvard University. He has taught at Peking, Harvard and the University of California, Riverside, and currently he is Chair Professor of Comparative Literature and Translation and Director of the Centre for Cross-Cultural Studies at the City University of Hong Kong. He has a wide range of interest in literary theory and criticism, East-West comparative studies, classical Chinese literature, English literature, and the interrelationship between literature and religion, philosophy, and history. He has published widely in English and Chinese and is the author of《二十世紀西方文論述評》[A Critical Introduction to Twentieth- Century Theories of Literature]. Beijing: Joint Publishing Co., 1986; The Tao and the Logos: Literary Hermeneutics, East and West, Durham: Duke University Press, 1992; Mighty Opposites: From Dichotomies to Differences in the Comparative Study of China. Stanford: Stanford University Press, 1998; and most recently,《走出文化的封閉圈》[Out of the Cultural Ghetto], Hong Kong: The Commercial Press (Hong Kong) Ltd., 2000.

Metaphor, Transference, and the Problem of Translatability
Scroll to top