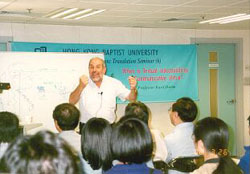 The linguistic and rhetorical norms of the target language and culture have always been a crucial element in the theory and practice of translation. These preferences invariably compete with another set of textual norms already in place as part of the language user’s rhetorical competence. Included here are such variables as educational background, orate vs. literate predilections, mother tongue’s linguistic/rhetorical preferences, etc. To prevent conflict of values (linguistic or otherwise), we rather urgently need a model of cross-cultural communication which reconciles these differences. To be effective, such a contrastive-rhetorical model would have to go beyond the single sentence, in order to capture the communicative act at the higher level of text, genre and discourse. A notion of “culture” that is equally comprehensive will also be needed. This must go beyond static, atomistic, socio-cultural objects, to encompass what we actually do when we engage in a diverse range of socio-textual practices. We further need a model of speaker/writer visibility that can identify those circumstances in which visibility may or may not be justified. Visibility gives rise to varying degrees of textually inaccessibility. The practical aim of this exercise is to work out a set of strategies for curbing or promoting author visibility (and textual inaccessibility) along lines that declare motivated inaccessibility a communicative virtue.

Since 1980, Basil Hatim has been involved with translator and interpreter training (both with reference to English/Arabic, and in the wider context of training across other languages and cultures). He has lectured across the UK and worldwide on the focus of his research: Rhetoric, Text Linguistics and Translation. He has also written extensively on issues of discourse and the translator – His publications include: Communication Across Cultures (Exeter University Press 1997), Teaching and Researching Translation (Longman 2000), and with Ian Mason, Discourse and the Translator (Longman 1990) and The Translator as Communicator (Routledge 1997). Currently, Dr Hatim is working on a New Introduction to Translation: A Resource Book (with Jeremy Munday for Routledge). At present, he is Professor of English and Translation at the American University of Sharjah, United Arab Emirates, on leave from his post as Professor of Translation & Linguistics at Heriot-Watt University Edinburgh, UK.

When is Textual Inaccessibility a Communicative Virtue?
Scroll to top