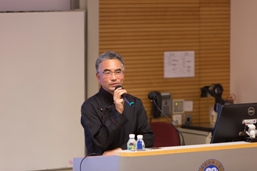 Tibetan director and fiction writer Pema Tseden’s films and fictions from The Silent Holy Stones 《靜靜的嘛呢石》to Tharlo 《塔洛》are acclaimed by scholars and critics to be rare moments which individuate Tibetan characters, rather than conceiving of the Tibetan people en masse as the ethnic and cultural Other of China. In this seminar Pema Tseden will discuss with Lim Dae-geun, the Korean translator of his fiction and Maialen Marin-Lacarta, the Spanish translator of his short story Tharlo, how his characters fare in their audience and reader-reception beyond the contexts of these original films and fictions. They will also discuss Pema Tseden’s current documentary project tracking the life of the boy actor who played the Little Lama in The Silent Holy Stones after leaving monastic life. This seminar will include a book launch of the Korean translation of Pema Tseden’s short story collection entitled Holy Stones, Quietly Chiselled and the Spanish translation of Tharlo as an e-book and a screening of sections from Pema Tseden’s documentary work-in-progress, My Little Lama.

Maialen Marin-Lacarta
Maialen Marin-Lacarta is a translator and Assistant Professor in the Translation Programme at Hong Kong Baptist University. She holds a PhD in Chinese Studies and in Translation and Intercultural Studies from the National Institute of Oriental Languages and Civilisations (INALCO) in Paris and the Autonomous University of Barcelona. Her translations of Chinese literature into Basque and Spanish include works by Pema Tseden, Shen Congwen, Mo Yan, Yan Lianke, Yang Lian, Mu Shiying and Liu Na’ou.

The Afterlife of Pema Tseden’s Characters
Scroll to top