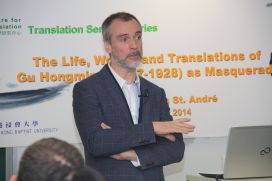 Joan Riviere’s article “Womanliness as a Masquerade” will form the basis of a discussion of the late Qing intellectual and noted translator Ku Hung-ming. Specifically, this paper will argue that, just as some women can be seen as performing ‘womanliness’ as a masquerade, so too we may theorize the translations of Gu Hongming as a type of masquerade, a conscious adopting of a role that draws on pre-existing norms relating to that role. This understanding of his work, in turn, allows us to see how his translations, his original writings in English, and his life in China fit together to form a performance of Chineseness, not for his compatriots, but for foreigners. Yet while drawing on pre-existing stereotypes of Chineseness built up in Europe over two centuries in order to be seen as Chinese, Gu managed to avoid a simple self-orientalizing persona, arguing for the continued relevance of Chinese thought in the modern world. Although he may have only enjoyed limited success in his own lifetime, his work deserves more attention at a time when translations out of Chinese by Chinese translators are on the rise.

After completing his PhD in comparative literature at the University of Chicago, James St. André spent a year in Taiwan doing postdoctoral research on translation history. His first teaching position was in the Chinese Department of the National University of Singapore, where he spent six years. He then accepted a joint appointment in East Asian studies and translation studies at the University of Manchester, where he taught history, theory and practice of translation for eight years before moving to The Chinese University of Hong Kong’s Department of Translation. Recent publications include an article on ‘face’ in The Journal of Pragmatics, various articles in The Translator, TTR, and Translation and Interpreting Studies, as well as two edited volumes, Thinking Through Translation with Metaphors (St. Jerome 2010) and, with Peng Hsiao-yen, China and Its Others: Knowledge Transfer through Translation, 1829-2010 (Rodopi 2012). He is currently preparing a monograph, Queering Translation, to be published by University of Hawai’i Press.

The Life, Works, and Translations of Gu Hongming (1857-1928) as Masquerade
Scroll to top