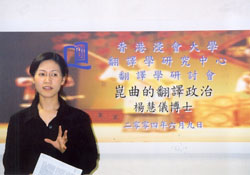 A text is never an isolated entity. It is always at the same time an intertext. Meaning is not generated exclusively within the text, but also around the text. After the compelling “cultural turn” in Translation Studies, it is almost impossible for any responsible translators not to look at the text to be translated and the translated text as cultural products, and thus see her/himself as an active participant of cultural production in the society. Kunqu (or known as kunqu opera) as the oldest existing form of xiqu is caught in the webs of intriguing cultural and political meanings. This constitutes complications in the dealing of kunqu texts, in translation or production. Whether voluntarily or involuntarily, the translated text once placed in the public sphere would be recuperated into certain discourses. Ignoring these politics is to give up any control one might have over one’s own cultural production. On the contrary, adopting a critical approach might turn translating kunqu into a site where negotiation of meaning, identity and discourse could take place, and where differences and autonomy could be articulated.

Jessica Yeung obtained her Bachelor degree in Translation and M.Phil. in Comparative Literature and Cultural Studies from the University of Hong Kong, and her Ph.D. from Middlesex University, London. Her Ph.D. thesis was on the transformation of xiqu (Chinese opera) as a social process, with a theoretical grounding on Raymond Williams’ works of cultural Marxism. Her research focuses on translating for the theatre, and translation as a cultural production. She has published both academic and journalistic writings on translating theatre and East/West theatre studies. Apart from producing subtitles for xiqu, she has also translated drama and radio plays, including for the BBC World World Play Series. She is now Assistant Professor of the Programme of Translation at the Hong Kong Baptist University. She is also a practicing theatre critic and involved in productions of drama and xiqu.

The Politics of Translating Kunqu
Scroll to top