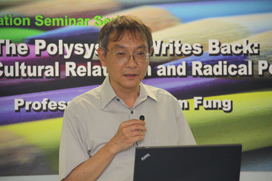 In the past two decades there has been a tendency to politicize translation studies and other disciplines in the humanities, alleging that the dominance of theories originating from the West is the result of power differentials instead of academic merits. Scholars of periphery origin who embrace central theories and values are accused of “self-colonization”. Such postcolonialist thinking is based on a strong, prescriptive version of cultural relativism, which claims, in disregard of evidence to the contrary, that “cultures are equally valid”, presumably on the grounds that any standards for measuring the validity of cultures must be ethnocentric. However, there are objective or at least cross-culturally intersubjective standards for certain aspects of cultures, such as academic research and human rights, and by these standards some cultures are indeed superior to others.
The fallacies of prescriptive cultural relativism are that the nation-state is regarded as the only legitimate unit of culture, that national differences are over-emphasized, and that an “is” is turned into an “ought”. Built on these fallacies, postcolonialism serves as an ideological weapon to challenge the political establishment in central countries, and becomes a pro-establishment excuse to suppress diversity and human rights in peripheral countries. In both types of countries it has enabled scholars to gain academic and/or political power.
Some theorists prefer postcolonialism only because Marxism has fallen out of favour. They have overlooked a fundamental difference between the two: the former is universalist while the latter is particularist, and they have put academic integrity at risk. Intellectuals are duty-bound to speak what they believe to be the “truth” to all people, including the powerful and the powerless, especially those in “their own” cultures.

The Polysystem Writes back: On Prescriptive Cultural Relativism and Radical Postcolonialism
Scroll to top