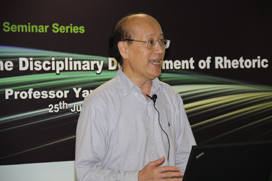 While a rhetorical perspective on translation has started to attract scholarly attention, translation’s impact on the disciplinary development of rhetoric remains unexplored by practitioners in the fields concerned. Even a cursory look into rhetoric’s long history, however, would turn up much evidence of translation’s crucial role in shaping up the conceptual and institutional contours of the art of persuasion. And questions such as “how key rhetorical concepts became translated from one language into another” or “when and what seminal texts were rendered available interlingually to rhetorical practitioners in different cultural contexts” actually point us to a more intelligent understanding of the way rhetoric has been constituting itself as an important area of studies.

Yameng LIU (Ph.D. in English, University of Southern California, 1992), formerly an associate professor of English and rhetoric at Carnegie Mellon University, is currently Professor of English at Fujian Normal University, China, and a visiting professor in the Department of Chinese, Translation and Linguistics at City University of Hong Kong. He has published in the areas of rhetorical studies, argumentation studies, comparative cultural studies and translation studies, in journals such as Philosophy and Rhetoric, Rhetoric Review, Rhetoric Society Quarterly, Argumentation, Philosophy East and West, and Chinese Translators Journal. Among his more recent publications are In Pursuit of Symbolic Power (Beijing SDX Press, 2004; in Chinese); A History of Rhetoric in the Western Tradition (Beijing Foreign Language Teaching and Research Press, 2008; in Chinese); “Towards Representational Justice in Translation Practice” (in Jeremy Munday, ed., Translation as Intervention, Continuum, 2007); and C-E translation of Xu Chongxin’s “Artistic Translation: Some Theoretical Issues Investigated” (in Mona Baker, ed., Translation Studies: Critical Concepts in Linguistics, Routledge, 2009).

Translation and the Disciplinary Development of Rhetoric
Scroll to top