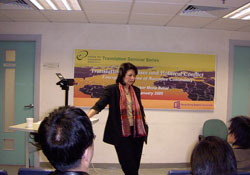 Faced with an increasingly polarized and violent world in which the opportunities for remaining ‘neutral’ are continually being eroded, translators – like most professional groups – are finding it difficult to position themselves, individually and as a group, in relation to various narratives that circulate around them and among them.

Fisher (1997:323) suggests that ‘communities are co-constituted through communication transactions in which participants co-author a story that has coherence and fidelity for the life that one would lead’, and goes on to propose two types of community. The first type is created by concession or conformity: members of the community adhere to a story because it provides justification for a way of life that leads to success or survival. The second type is created by election or conversion; one becomes a member of such a community because the story that brings its members together provides an ‘honored perception of oneself’. In terms of translation, there is no shortage of examples of communities formed by concession or conformity. Whether in professional or academic circles, there is hardly a country today that does not boast several professional and academic associations that provide different types of platform for conducting communication transactions to support such communities. This talk will focus on the emerging pattern of communities ‘by election or conversion’ in the translation world. It will attempt to describe their role as foci of resistance in an increasingly turbulent political environment and to offer a framework for interrogating the narratives they elaborate about themselves. The analysis will draw on the notion of narrative as elaborated in social and communication theory, and particularly in the work of Walter Fisher. A social theory of narrative has two main strengths in the current context. First, it recognises that people’s behaviour is ultimately guided by the stories they believe about the events in which they are embedded, rather than by their gender or colour of skin, for instance. (There is already a great deal of literature in translation studies which engages with attributes such as the translator’s gender or sexuality as static and single determiners of behaviour.) Second, it does not allow for ‘spaces in between’: no one, translators included, can stand outside or between narratives. At the same time, it recognises that we can be located within a variety of criss-crossing narratives, thus acknowledging the complexity of our positioning in relation to other participants in interaction.