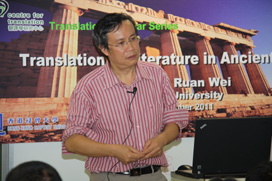 The translation of the Bible into Greek before Christianity took shape is well-known, but the translated nature of ancient Greek literature as a whole before Christianity emerged has not yet been fully explored. The present paper argues that ancient Greek literature was heavily indebted to West Asia. Yet due to the nature of information traveling in Antiquity – for a long time oral transmission was the dominating way for messages to be communicated from one language/culture to another, in which case semantic ‘accuracy’ in translation is meaningless – translation of literature in Greece basically did not take the form of textual rendition aiming at close sentence-to-sentence correspondence familiar to us today, but of source texts being rendered into target texts through rewriting, or adaptation, modification, augmentation and diminution of the original themes, scenes and characters.

Ruan Wei, Professor of English, Acting Chairman of Academic Committee, Shenzhen University.
He received his Ph. D from Edinburgh University in 1986 and has been teaching at University of Shenzhen since 1989. Research Fellow at Harvard-Yenching Institute from October 1998 to October 1999, and academic visitor at Cambridge University from April to October. Professor of English at the School of Foreign Languages, Peking University from August 2002 to March 2003.
He has been engaged in civilizational studies, studies in contemporary British fiction and translation studies. He is a well-published writer of the highly prestigious intellectual monthly READING in China and has written on a wide range of topics concerning civilization and cultural studies. His publications include Geo-Civilization (Shanhai Sanlian, 2006; a Korean version has been published by Simsan Cultural Publishing House), Fifteen Lectures on Civilizations (Peking University Press, 2008), A Comparative Study in Religions, Cultures and Civilizations: China and the West (Social Science Documents Press, 2002), and The Performance of the Civilizations (Peking University Press, 2001).

Translation of Literature in Ancient Greece
Scroll to top