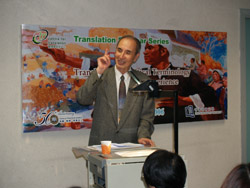 A profusion of new terminologies poses a daunting challenge to translators/interpreters in China today. It is a test of their command of two languages and cultures as well as their mental versatility.
While reflecting present realities, many of the newly-coined terms are deeply rooted in China’s history and culture. The more the translator understands the historical and cultural background of these terms, the better he or she can appreciate the trend of thought of the term’s initiator and user. Additionally, the mentality and cultural inclinations of the recipient should be taken into consideration when rendering these terms into English. The attempt to meet both these demands can sometimes be truly baffling. However, a successful solution provides immense joy and satisfaction.
Chinese translators often pool their collective wisdom to handle these arduous tasks. Some of the translations are real gems, others are middling jobs, still others unsatisfactory. Help from compatriots and international friends are welcome.

Lin Wusun is a writer and translator with cross-cultural background, having received his education in China, India and the United States.
He began his journalistic career in 1950. Between 1958 and 1966, he was an international affairs columnist for the weekly magazine Peking Review. He became the journal’s deputy editor-in-chief in the early 80s and, in 1987, its acting director. In these capacities, he wrote and edited many articles and books on a wide variety of subjects, both in Chinese and English. Between 1988 and 1994, he was director of the Foreign Languages Publishing and Distribution Bureau of China and president of the China International Publishing Group. One of his responsibilities was to finalize translation of some official statements.
Since his retirement from his administrative post in 1994, he has spent his time writing, translating and lecturing. He is an adjunct professor of Tsinghua University’s Center for International Communications and taught for three years Chicago University’s Institute for International Studies program in Beijing. He has devoted much of his time to the work of the Translators Association of China, being its executive vice-president, editor of Translators of China and chair of the committees on translation teaching and translation theory and on media translation.
Among his translated works in English are: Sun Zi and Sun Bin’s The Art of War, The Analects (Confucius), The Silk Road and Lest We Forget: Nanjing Massacre 1937. More recently, his translation of Gen. Xiong Guangkai’s International Strategy and Revolution in Military Affairs and International Situation and Security Strategy and Riverside Talks, a dialogue between Minister Zhao Qingzheng and Rev. Lius Palau won widespread acclaim.
Lin Wusun is currently advisor to the Translators Association of China, Chairman of the Chinese National Committee for Accreditation of Senior Translators and council member of the Chinese Association for the Study of International Friends and the Western Returned Scholars Association of China.

Translation of Political Terminology – An Intriguing Experience
Scroll to top