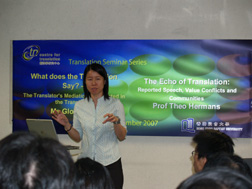 The translation discourse in the Republican Era consisted largely of articles and paratexts written by intellectuals in the literary field. Many of them had translated works in different genres from foreign languages into Chinese, motivated by the urge to bring in western knowledge as well as innovative rhetorical devices to enrich the vernacular language. Their intentions were never as pure as they claimed, however. Some worked with a political agenda; some wanted to advocate a certain form or style of writing and find examples in the West through translation. The discussions might appear in the form of prefaces or postscripts, more were articles in newspaper supplements and literary journals. The topics ranged from the standard and methodology of translation to ruthless criticism of translated texts. They accumulated to shed light on the conception of the flourishing activity called translation at the time. But what about the numerous translators who did not contribute to that dialogue? In what ways can the behaviour of these practitioners be accounted for in view of the translation theories and, indeed, the social space in which they operated? In my research project, I start with the product, i.e. the translation, and examine the forms of mediation found in the translated text. I want to study the translator as an agent and explore how he or she is shaped by, in turn generates and/or reinforces the set of values governing the practice of translation in the larger social structure.

Gloria Kwok-kan LEE (利幗勤) holds a B.A. and an M.Phil at the University of Hong Kong, the latter on a thesis entitled ‘Chinese Translations of Oscar Wilde’s Plays and Fairy Tales: a Reappraisal’. She had taught in the translation programmes in HKU and Lingnan University before moving on to start a doctoral research in Translation Studies at University College London, UK under the joint supervision of Prof. Theo Hermans (UCL) and Prof. Michel Hockx (SOAS). The research project, tentatively named ‘Power and the Translator: Joseph Conrad in Chinese Translations during the Republican Era 1912-1949’, aims to examine the translator as an agent within the social structure he or she works. The thesis is based on the findings of a case study of the Chinese translations of Conrad’s sea stories published in 1928-1937.