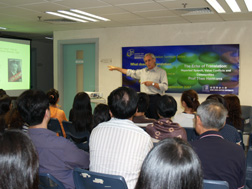 We mostly think of translation as endeavouring to render an original text in another language without addition, omission, distortion or bias. But what happens when translators find some of the things they are meant to translate objectionable? What if the scene of translation involves a clash of values?
In this paper I offer a model that can help us deal with such conflicts. I begin by presenting a few examples, from Adolf Hitler to Boccaccio, in which the value conflict is very marked. I then set out a theoretical framework based on the idea of translation as reported speech and on a definition of irony as ‘echoic utterance’ as understood in Relevance theory. I suggest that while strong forms of translator irony may be relatively rare, we can trace irony in many translations. I conclude by claiming that ‘echoic’ translation, or translating with a dissociative attitude, is only a special case of translating with an attitude.

Theo Hermans is Professor of Dutch and Comparative Literature at University College London. He is editor of The Manipulation of Literature (1985), Crosscultural Transgressions (2002) and Translating Others (2005), and series editor of ‘Translation Theories Explored’ (St Jerome Publishing, Manchester). His monographs include The Structure of Modernist Poetry (1982) and Translation in Systems (1999). The Conference of the Tongues is forthcoming. His main research interests are in theories and histories of translation.

The Echo of Translation: Reported Speech, Value Conflicts and Communities
Scroll to top