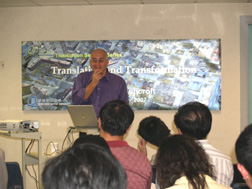 The development of Translation Studies in the 1990s was the natural outcome of an increasing fluid and globalizing world. But that development was preceded by one that was much more political, much more resistant and yet one in which the spirit of translation figured strongly. This was the emergence of post-colonial studies at the end of the 1980s. Arising from literature departments in the formerly colonized world, post-colonial theory very quickly demonstrated that the appropriation of language by post-colonial writers provided a model for the operation of the ‘local’ in a globalized world. A central argument, perhaps the central argument in this developing field circulated around the use of a colonial language by decolonizing writers. Does the use of a colonial language continue to ‘colonize the mind’? Does it marginalize local languages? Does it fail to capture the essence of the writer’s culture? This paper addresses some of these questions at the point at which Translation Studies and Post-Colonial Studies meet: the point at which post-colonial writers transformed the language – English – with acts of literary production, acts of inner translation, acts that transformed the field of English literature and created a world audience. This meeting point suggests questions about the future relationship between these two fields.

Translation and Transformation
Scroll to top