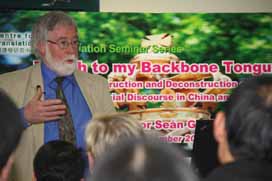 In his edition and translation of the 三字經 Sanzijing as a textbook for learning to read Chinese, Herbert A. Giles glossed each word’s etymology, semantics and connotations. When he glossed 家 jia as a pig beneath a roof, he parenthetically remarked to his intended British readership that “our” Irish neighbours would certainly understand this. Giles was posted to China in the British imperial consular service from 1867-1892. His condescension toward the Irish, a rebellious nation that Great Britain had already (apparently) colonised, is a counterpart to his attitude toward the Chinese, an empire that Great Britain wanted to colonise. The combination of imperial service and Sinology is not innocent in this case, and Giles’ discourse demonstrates the effects of attempting to master the colonised “abroad” on his attitudes toward the colonised “at home”, an effect that has been clearly analysed and explained by Frantz Fanon. Another consular official, Robert Hart, who was a Northern Irish Protestant Unionist, took charge of the Chinese customs bureau, to satisfy imperial designs, and hired Catholics from the West of Ireland to control the customs service. The “Ever Victorious Army” under the command of “Chinese” Gordon had to resort to the services of an Irishman who had become a Chinese pirate and Taiping mercenary in order to get firsthand information about the Taiping defenders. The Treaty of Tianjin, imposed as a result of the second Opium War, restricted the semantic freedom of Chinese officials in their own language and imposed an English meaning on the Chinese term夷 yi. Giles and Hart and other colonial administrators represented the colonisers – at home and abroad – and both “translated” China from a British imperial perspective, in action in both cases, and also in words in the case of Giles and the treaty of Tianjin. The anonymous Irish informant was but one representative of the colonisers’ underclass, but one who also “translated” China. Postcolonial studies tend to concentrate on the experience of the colonised before, during and after the processes of colonisation, but seldom analyse the impact of imperialism on the colonisers themselves, and even less so, on the underclasses created in the Metropolis by the very same process of colonisation that affected (and affects) the colonised. Ireland suffered the full effects of colonisation, but the Irish were also integrated into the imperial service, the landlord class as “masters” and the peasants as soldiers and workers. The movement for Irish independence at the turn of the 20th century involved the creation of a new discourse that could deconstruct the dominant imperial discourse. Chinese reformers took note and translated many Irish literary and political texts into Chinese in the early decades of the century. William Howard Russell, an Irish journalist who became the first “war correspondent” for The Times during the Crimean War, used his writings to deconstruct the imperialist discourse that had provoked and justified that war and turned public opinion against it, as did the writers of the “Irish Revival”. Oscar Wilde used irony and parody de deconstruct British classism and found in Herbert Giles’s translation of Zhuangzi a parallel to his own method. Tracing the history of the history of the construction and deconstruction of colonial discourse in China and in Ireland, and its effect on the construction of new “modern” identities in both cases, is complicated, but case studies of these processes, such as those offered here, will add a new dimension to postcolonialist considerations of the construction of a British colonial discourse in China and in Ireland.

‘British to my backbone tongue’: The construction and deconstruction of a British colonial discourse in China and Ireland
Scroll to top