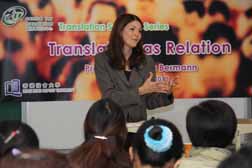 In our complex world of migration, war, and globalization, translation among languages and cultures is everywhere. As citizens of the twenty-first century, we inevitably think in and through translation. Yet we have only begun to explore its contemporary modes of operation, its challenges and its promise for study in an international and interdisciplinary context. In my paper, I hope to outline some of these challenges as well as its promise. Looking to some current views of translation, I will discuss ways in which it might be rethought in terms of relation, dialogue and analogy. I will discuss the promise of this way of ‘thinking translation’ by focusing on a few contemporary ideas about language and literary dissemination. In order to consider these issues more concretely, I will also consider the recent translation history of Dante Alighieri’s Commedia.

Sandra Bermann, Cotsen Professor of the Humanities, currently serves as Chair of the Department of Comparative Literature at Princeton University. In addition to articles and reviews in scholarly journals, she is author of The Sonnet Over Time: Studies in the Sonnets of Petrarch, Shakespeare, and Baudelaire, translator of Manzoni’s On the Historical Novel and co-editor with Michael Wood of Nation, Language, and the Ethics of Translation. Her current projects focus on lyric poetry, translation, the intersections between twentieth-century historiography and literary theory, and new directions in the field of comparative literature. A recipient of Whiting and Fulbright Fellowships, she has been a visiting scholar at the Institute for Advanced Study in Princeton and the Columbia University Institute for Scholars at Reid Hall in Paris. At Princeton University, she was Master of Stevenson Hall for eight years and has been involved in numerous curricular innovations, including the Program in Translation and Intercultural Communication and the Bridge Year Program. She recently completed a term as President of the American Comparative Literature Association.

Translation as Relation
Scroll to top