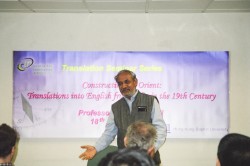 This is a postcolonially inflected historical narrative of translations from India during the “long” nineteenth century, ranging from 1777 when an Indian text was first translated into English, upto 1913 when a book of poems, self-translated into English by its Indian author, won him the Nobel prize. Some major trends and biases in the choice of texts taken up for translation are highlighted, such as the British “orientalist” preoccupation with religious and classical texts rather than with vernacular and popular works, and some monumental translation projects are re-examined, such as the Sacred Books of the East.

Harish Trivedi is Professor of English at the University of Delhi and has been visiting professor at the University of Chicago and the University of London. He is the author of Colonial Transactions: English Literature and India (Calcutta 1993; Manchester 1995), and has co-edited Literature and Nation: Britain and India 1800-1990 (London 2000), Post-colonial Translation: Theory and Practice (London 1999), and Interrogating Post-colonialism: Theory, Text and Context (Shimla 1996; rpt. 2000). He edited a special issue of New Comparison (U.K.) on “Comparative Literature in India” (Spring 1997), and co-edited a special issue with “Focus on Translation” of the postcolonial journal Wasafiri (London, Winter 2003).

Constructing the Orient: Translations into English from India in the 19th Century
Scroll to top