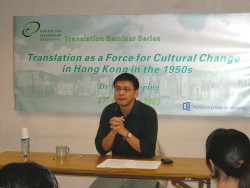 In 1956 Ma Lang (馬朗) launched Literary Current Monthly Magazine (文藝新潮) as a vehicle for publishing both creative work of Chinese writers and translations of modernist literature. These translations constituted the first systematic attempt in Hong Kong to introduce Chinese readers to modernist works from foreign literatures. The pioneering efforts of the editor and translators of this literary journal have been accorded scant attention by researchers on Hong Kong literature, however. This paper discusses these translations as a force for cultural change in Hong Kong in the 1950s. This paper draws on the polysystemic, norms-based paradigm developed by Even-Zohar and Toury, but puts greater emphasis on the ‘other’: a translation is seen as a response to other texts, and constitutes a dialogue among different voices and values. This orientation to the other not only renders the opposition between adequacy and acceptability problematic, but also requires an awareness of the difference that translation research can make to the construction of cultural knowledge.