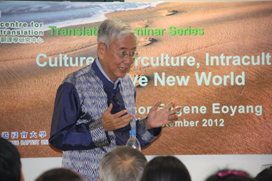 “Culture—Interculture—Intraculture” identifies three stages of cultural identity: cultural: where the foreign is clearly marked, as in Euripides’s Medea, the book of Ruth in the Bible, Shakespeare’s Henry V; intercultural: where the foreign is absorbed in the native, as in the Pole Joseph Conrad, the Czech Tom Stoppard, and the Japanese Kazuo Ishiguro in Great Britain, the Pole Czelaw Milosz, the Russians Vladimir Nabokov and Josef Brodsky in the United States; and the Romanians Paul Celan, E. M. Cioran, Eugène Ionesco, the Irishman Samuel Beckett, and the Chinese François Cheng in France. A new state, which I call “intracultural”, is one where the foreign is recognized in its own language but is viewed as a global patrimony, or as part of the native culture. Chief among these exponents would be the great modernists, T. S. Eliot, Ezra Pound, and James Joyce; the filmmaker Jean Renoir, especially in his La Grande Illusion. The “intracultural” factor has been by no means marginal or incidental in world culture: many modern Indians have discovered their own Sanskrit tradition through English translations; contemporary Japanese reacquaint themselves with their own Heian classic, Genji monogatari (The Tale of Genji), through Arthur Waley’s and Edward Seidensticker’s English translations; nor should we forget that the entire Renaissance was sparked by the discovery of Aristotle through the Arabic translations of Avicenna and Averroes. The greatest modern exponent of the intracultural perspective would be the novelist Haruki Murakami.

A scholar on comparative literature, translation, East-West literary relations, English, and the humanities, Eugene Eoyang is Professor Emeritus of English, Humanities, General Education, and Translation at Lingnan University (Hong Kong), as well as Professor Emeritus of Comparative Literature and of East Asian Languages & Cultures at Indiana University (Bloomington). At Lingnan, he was also Director of General Education from 2000 to 2008. He is the author of The Transparent Eye: Translation, Chinese Literature, and Comparative Poetics (University of Hawaii Press, 1993); Coat of Many Colors: Reflections on Diversity by a Minority of One (Beacon Press, 1995), ‘Borrowed Plumage’: Polemical Essays on Translation (Rodopi, 2003), Two-Way Mirrors: Cross-Cultural Studies in Glocalisation (Lexington Books, 2007), and The Promise and Premise of Creativity: Why Comparative Literature Matters (Continuum Books, 2012).
Professor Eoyang was President of the American Comparative Literature Association in 1993-1995 and is a fellow of the Royal Society for the Encouragement of Arts, Manufactures and Commerce. The Indiana University Asian American Alumni Association conferred on Professor Eoyang the 2012 Distinguished Asian/Pacific American Alumni Award.