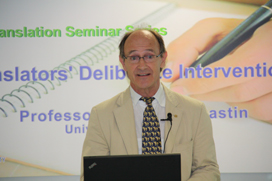 Shifts in translation have been extensively visited and revisited. Many different taxonomies exist that intend to list most decisions taken or choices made by translators, be these decisions called shifts, techniques, procedures or strategies. The problem is that there’s no explicit distinction between compulsory and deliberate interventions. We believe that a clear distinction must be made between these two categories. Compulsory shifts belong to the usual practice of any translator. Compulsory shifts are usually “unconscious” because of the very nature of translation arising from its linguistic and cultural material. Nevertheless translators often consciously decide to intervene in texts for syntactic, semantic and mainly pragmatic reasons (Chesterman). Those deliberate decisions might be dictated by a third “party” such as the client or the commissonner, or by the translator himself for many personal, cultural or ideological reasons. Those decisions are not uncommon and are sometimes dramatically “unfaithful”. Do they imply treason, logics, relevance or simply a translator’s whim? Do paratexts explain such deliberate interventions? Is the concept of “assumed translation” sufficient to justify such distance? What about “telos”? By means of examples taken from Latin American history and contemporary pragmatic texts, we will tackle these issues.

Georges L. Bastin (www.georges.bastin.ca), Ph. D. in Translation Studies from the Université de Paris III, is Full Professor at the Université de Montréal and Head of the Literatures and Modern Languages Department. He has taught PhD courses and workshops on theory, revision and history in various Spanish and Latin American Universities. His research interests lie in the fields of translation pedagogy and translation history. He is author of Traducir o adaptar, co-author of Charting the Future of Translation History and Profession traducteur (2012) and has published in Routledge Encyclopaedia of Translation Studies, and various journals. He co-edited two issues of TTR on translation training (2008) and one on East-West Encounters (2010). He heads the Research Group on Translation History in Latin America (www.histal.ca) and edited two META special issues on translation history (2004 and 2005). He has been President of the Canadian Association for Translation Studies (2006-2010) and from 2009 he is Chief Editor of META.