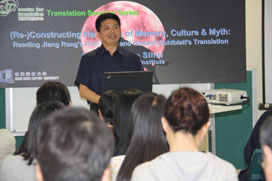 Jiang Rong’s semi-autographical novel Lang Tu Teng (《狼圖騰》, first published in 2004) has been a huge literary triumph (winner of the Man Asian Literary Prize in 2007) and an unprecedented cultural phenomenon in Mainland China, breaking all-time sales records as the second most read book after Chairman Mao’s little red book. Howard Goldblatt’s lucid translation of Wolf Totem (2008) has also made the novel into an exciting popular work of narrative fiction for the international community of literary readers and cultural critics. This talk proposes to look at how Jiang Rong the original author and Howard Goldblatt the translator, with similarities and differences, (re-)construct narratives of collective and personal memories, Chinese state ideology and Mongols’ nomadic culture, modernity and tradition, ecological warning and political indictment, existential struggle and spiritual survival around the stories of Chen Zhen the protagonist and the tales of the Han Chinese, nomadic Mongols (descendants of Genghis Khan) and their fierce yet worthy foes – the Mongolian wolves on the grassland of Olonbulang in Inner Mongolia steppes that, for centuries, the Mongols had been “religiously” instructed to contend with, to worship and to learn from. The presentation will share a few points of textual and contextual understanding when literary texts move across languages and cultures.

Mao Sihui received his B. A. (in English Language & Literature) and M. A. (in English & American Literature) from the Guangzhou Institute of Foreign Languages (now Guangdong University of Foreign Studies), his second M.A. (in Contemporary Literary & Cultural Studies) from University of Lancaster, UK and his PhD (in Comparative Literature) from the University of Hong Kong. After many years of teaching at Guangdong University of Foreign Studies (from 1982 to 2000) and then Hong Kong Lingnan University (2001 to 2003), he has been Professor of English and Comparative Cultural Studies and Director of MPI-Bell Centre of English, Macao Polytechnic Institute. He has also served as Vice President of Sino-American Comparative Culture Association of China since 2000, President of Federation of Translators and Interpreters of Macao since 2007, Chairman of FIT Translation and Culture Committee since 2009 and FIT Council Member since 2011.
Mao Sihui has taught BA, MA & PhD courses such as “Modern British & American Drama”, “Contemporary Critical Theory”, “Comparative Cultural Studies”, “Film Culture”, “Translation for the Media”, “Translation of Texts in Popular Culture”, and “Translating Cultures”. His publications include Technologising the Male Body: British Cinema 1957-1987 (1999), New Perspectives: Contemporary Literary and Cultural Studies (2000), Decoding Contemporary Britain (2003), Literature, Culture and Postmodern Transformations: 8 Case Studies from William Shakespeare to James Bond (2009). He is General Editor of the New Topics in Contemporary Cultural Studies Series (6 books, 2007-2009) and co-editor of Critical Arts: Media Discourses and Cultural Globalisation (Routledge & UNISA, Vol 25, No. 1, 2011). He has also published over 60 academic journal papers and book chapters in literary, cultural and translation studies. He has been working on Representations of Macao in Contemporary World Cinema.