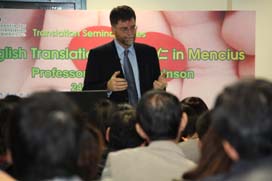 Chinese-English dictionaries typically offer as the closest English equivalents of rén 仁 “benevolent/-ce, kind/ness, humane/ness,” and Mencius’s English translators by and large stick to those translations as well. Following the lead of James Legge, for example, D. C. Lau and the translators of the Shandong Friendship Press edition meticulously translate it in almost every case as “benevolent” or “benevolence,” and most Mencius scholars writing in English, whether Chinese or non-Chinese, also translate it as “benevolent/-ce”; David Hinton uses “humane” and “humanity.” This talk will examine those translations in specific Mencian contexts, asking whether they are adequate to the complexity of Mencius’s concept—and, if not, what other options there might be.

Douglas Robinson is Tong Tin Sun Chair Professor of English and head of the English Department at Lingnan University. He is author of many books on translation, including The Translator’s Turn, Translation and Taboo, Becoming a Translator, Western Translation Theory From Herodotus to Nietzsche, Translation and Empire, and the forthcoming Translation and the Problem of Sway. He is currently working on a book comparing conceptions of rhetoric in Mencius and Aristotle.

English Translations of rén 仁 in Mencius
Scroll to top