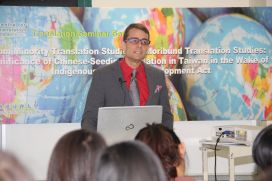 Minority Translation Studies (MTS), the study of translation to and from minority languages, evolved out of Descriptive Translation Studies (DTS) in the 1980s, but nobody has proposed Moribund Translation Studies, the study of translation to and from moribund languages, i.e., languages with few native speakers, especially young native speakers. There is some empirical research in what I am calling Moribund Translation Studies, but no textual analysis: the researchers do not seem to have bothered to learn the languages in question and are as a result unable to assess Gideon Toury’s predictions about minority language translation, let alone theorize moribund language translation. That’s where I come in. I studied Seediq, an Austronesian language in Taiwan, in order to study the translation of the screenplay for the feature film SEEDIQ BALE (Wei Te-sheng, 2011), 70% of the dialogue of which – 7500 words! – was performed in Seediq. The results I obtained contradicted scholarly wisdom in DTS or MTS. The translators ranged dialectically (no pun intended) between foreignization and domestication as they reflected on and contributed to the linguistic culture of Seediq. Now it is time to study the larger picture, which has changed locally with the promulgation of the Indigenous Language Development Act on June 14, 2017. The larger picture includes various state-supported efforts to revitalize Seediq and other Austronesian languages in Taiwan as well as similar efforts around the world.

Darryl Sterk is a Canadian literary translator and translation scholar with a Taiwanese wife and Taiwanese-Canadian daughter.