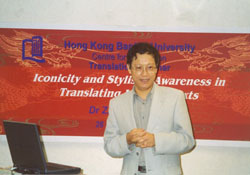 The talk will begin with a brief overview of iconicity as a syntactic phenomenon and a stylistic concept. It then discusses how iconicity has been regarded as an important source of psychological effects in textualization. It argues that in translating a literary text, the syntax has to be observed not only for its “utilitarian” functions, but more importantly, for its “enabling” functions, so as to understand its cognitive potential of iconicity. It is such potential that renders syntax theoretically significant in the domain of literary writing, translating, and criticism; for it relates linguistic mechanisms to artistic effects, and thus provides a stylistic explanation for the effect of “meaning lingering beyond the boundary of the text”. The talk will demonstrate how an awareness of such syntactically-enabled interactions among form, content and effect can serve as an objective point of reference in the writing, critiquing and translating of a literary text. In particular, it will present an intertextual study of a group of “extraordinary” sentences from one of Wang Meng’s short stories and their translation into English.

Zhu Chunshen received his PhD from the University of Nottingham, Britain. He taught at Fujian Normal University in China and the National University of Singapore before joining the City University of Hong Kong in 1998, where he is now Associate Professor and Programme Leader of MA in Translation and Interpretation in the Department of Chinese, Translation & Linguistics. His academic publications include 《翻譯探微》(New Perspectives on Translation: Words, Texts, Poetics, Taipei: Bookman, 2001) and a variety of journal articles on translation. His translations include a Chinese version of Writer’s Digest’s Handbook of Short Story Writing and Oscar Wilde’s De Profundis, publications in Chinese Condensed Books of Reader’s Digest, and a collection of Modern Chinese and English translations of classical Chinese poems 《古意新聲（品賞本）》 (Wuhan: Hubei Education, 2003).