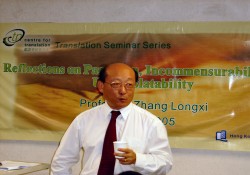 Thomas Kuhn’s famous book, The Structure of Scientific Revolutions, first published in 1962, with a second and enlarged edition in 1970 and followed by many reprints, has exerted a tremendous influence on literary and cultural studies far beyond its original purpose of understanding specific changes in the history of science. Two concepts in that book – paradigm and incommensurability – are particularly important for understanding the changes in literary and critical theories in the past forty years. In this presentation, these two concepts will be examined in relation to East-West cross-cultural understanding and also in the light of Kuhn’s own revision of his original theory in his last book, published in 2000, significantly entitled The Road since Structure. As translation is by nature a crossing of different systems, the challenge of untranslatability Kuhn presented in his works needs to be answered both theoretically and in practice.

ZHANG Longxi received his MA in English Literature from Peking University and his Ph. D. in Comparative Literature from Harvard University. He has taught at Peking, Harvard, and the University of California, Riverside. He is currently Chair Professor of Comparative Literature and Translation and Director of the Centre for Cross-Cultural Studies at City University of Hong Kong.
He has written many journal articles and publications in both Chinese and English, and his publications include A Critical Introduction to Twentieth-Century Theories of Literature (in Chinese. Beijing: Joint Publishing Co., 1986); The Tao and the Logos: Literary Hermeneutics, East and West (Durham: Duke University Press, 1992); Mighty Opposites: From Dichotomies to Differences in the Comparative Study of China (Stanford: Stanford University Press, 1998); and most recently Ars Longa: Mini Essays on Language, Literature, and Culture (in Chinese, Tianjin: Baihua Literature and Art Publishing House, 2002). His new book Allegoresis: Reading Canonical Literature East and West (Ithaca: Cornell University Press) will be published in fall 2005.

Reflections on Paradigm, Incommensurability, and Untranslatability
Scroll to top