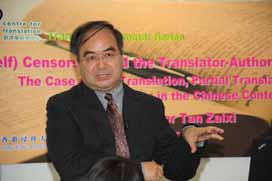 TAN Zaixi is Professor of Translation at Hong Kong Baptist University. He obtained his first degree in English Language and Literature at Hunan Normal University (China), and postgraduate degrees (both MA by research and PhD) in General and Applied Linguistics (specializing in translation studies) at Exeter University (UK). He is the author of over a dozen books including 《翻譯與翻譯研究概論——認知•視角•課題》(Translation and Translation Studies: Perceptions, Perspectives and Methodology, 2012), 《西方翻譯簡史(增訂版)》(A History of Translation in the West: Revised Edition; recommended by the Chinese Ministry of Education as a postgraduate research coursebook in universities; 2004/2006/2008/2009/2010/2013), 《翻譯學》(The Science of Translation; 2000/2005), and 《新編奈達論翻譯》(Nida on Translation—New Edition, 1999/2003), and a wide range of articles on translation and translation studies published in major, refereed Chinese and international journals including Meta, The Translator, Neohelicon, Across Languages and Cultures, Perspectives, Babel,《中國翻譯》(Chinese Translators Journal),《外語教學與研究》(Foreign Language Teaching and Research),《外國語》(Foreign Languages),《東方翻譯》(East Journal of Translation) and 《外語教學與研究》(Foreign Language and Their Teaching).

(Self) Censorship and the Translator-Author Relationship: The Case of Full Translation, Partial Translation, and Non-translation in the Chinese Context
Scroll to top