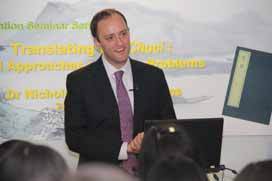 The Chuci 楚辭 (Songs of the South or Incantations of Chu) is one of the two oldest and most influential anthologies of Chinese poetry. Its poems depict the enduring tension of loyalty and dissent for the scholar-official of traditional China. The anthology is also notable for its regional elements, representing the culture of the ancient state of Chu (centered in the area of modern Hubei and Hunan provinces).
Yet despite the importance of the anthology, there is only one decent translation into English, completed in the 1950s by David Hawkes. Hawkes’s translation was remarkable for its time, but has come to seem more limited and unsatisfactory with time. First of all, the field of Chuci studies has advanced dramatically over the past few decades, particularly through the efforts of Chinese scholars and with the aid of excavated manuscripts and artifacts that have shed light on ancient Chu culture. Second, Hawkes’s approach to understanding the Chuci focused on using philological tools to identify the earliest strata within the anthology and to place them in specific historical settings, an approach that discounted the intertextual and ideological factors common to all the poems. Hawkes himself later admitted that he had not sufficiently appreciated the role of religion and mythology in structuring the anthology.
This talk will examine the presuppositions and strategies of Hawkes’s translation in light of new evidence and interpretations of the anthology, and present some alternate readings and renderings of selected passages.

Nicholas Morrow Williams is research assistant professor in the Mr. Simon Suen and Mrs. Mary Suen Sino-Humanitas Institute, Hong Kong Baptist University. He is currently revising his book manuscript, Jiang Yan and the Spirit of Six Dynasties Poetry, and working on a translation of selected poems by Jao Tsung-i.