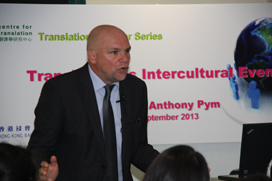 Belated interest in the aesthetics of the event (variously from Badiou) has brought renewed attention to the performative nature of translation. Part of this might be attached to the technologies that now favour groups of volunteer translators, who are at once the producers and consumers of translations (hence “prosumers”). Such translating subjects are able to enact the cultural products they desire, going beyond some of the discursive constraints of the Western translation form. More traditional prosumers can be found in the local translation committees and consultants of the United Bible Societies, where many interactions socialize the principles of Nida’s dynamic equivalence. A further group can be identified among activist translators, where the narrative of the cause is sufficient justification. In all these variants, as at points between, the participative capacity of the translation may be of more value than its representation of anterior text.

On this view, an effective translation is one that maximizes involvement by the translating community, where “involvement” can be understood in terms of interactive conversation and the shared construction of knowledge (Gumperz, Tannen). A translation thus becomes part of an ongoing conversation, en exchange, indeed as a prerequisite for participative democracy (Habermas). On the other hand, in situations where discursive involvement is minimal, as for example in most official translations done for the European Commission, a society of official event-less information sheds not only affective identification but, with it, the desire for participative democracy.

When a translation becomes a participative event, however, does that status not comprise its purported representative function? What happens to the trust that is traditionally placed in the eclipsed mediator? What are we to make of the concomitant threat of deprofessionalisation? Where does responsibility lie if conveyance of information is no longer a criterion for success? And what is the lasting ethical value of an event from which there is no critical distance (the Nuremberg rallies were also a participative social events)? In short, are we not back to the classical arguments of rhetoric versus ethics, where most participative events become potentially unethical?

These objections will be met, and a possible resolution will be proposed.

Anthony Pym works on sociological approaches to translation and intercultural relations. He is currently Professor of Translation and Intercultural Studies at Rovira i Virgili University in Spain. He is also President of the European Society for Translation Studies, a fellow of the Catalan Institution for Research and Advanced Studies, Visiting Researcher at the Monterey Institute of International Studies, and Professor Extraordinary at Stellenbosch University. He had written or edited some 23 books and 160 articles in the general field of Translation Studies, including Exploring Translation Theories (second edition 2014).