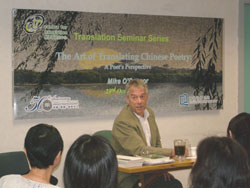 The evolution of a literary translator from rudimentary beginnings and intra-lingual practice to a more sophisticated inter-lingual one. Also, specific problems encountered, and insights gained, during the course of translating particular works of Chinese poetry. A First Principle of literary translation: The translated poem must be a good poem in the target language or it isn’t translation.

Mike O’Connor is a poet and translator of Chinese literature. His original works include The Rainshadow; The Basin: Life in a Chinese Province; and, most recently, When the Tiger Weeps. Translations include, When I Find You Again, It Will Be in Mountains: The Selected Poems of Chia Tao (779-843); The Tienanmen Poems; a novel by Tung Nien, Setting Out; and Where the World Does Not Follow: Buddhist China in Picture and Poems (photography by Steven R. Johnson).
O’Connor, a native of the Olympic Peninsula, Washington State, received an MFA in writing & poetics from Naropa University, Boulder, Colorado, and a literature fellowship from the National Endowment for the Arts. He currently resides with his wife, Liu Ling-hui, a dance teacher and choreographer, in Port Townsend, Washington.

The Art of Translating Chinese Poetry: A Poet’s Perspective
Scroll to top