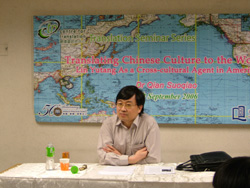 During a major part of the twentieth century, to the Western world and the world at large, the most well-known Chinese writer/intellectual was Lin Yutang. It is now generally believed that Lin Yutang’s greatest contribution lies in his introduction and translation of Chinese culture to the world. But I will argue that Lin’s literary practices during his American years offer a most interesting case for cross-cultural study as they raise many questions which must be addressed in the historical context of Chinese-American cross-cultural interpenetration. To travel from a cosmopolitan writer in Shanghai to a cosmopolitan writer in New York, is that path as smooth as it appears? What kind of role does a Chinese cosmopolitan assume, once transplanted to the Western world, in translating his native culture? What are the modes and strategies of such cross-cultural translation and what are the effects to the target culture? Relying upon intimate correspondences between Lin and his publisher/friend Richard Walsh, I will examine the strategies and effects of Lin Yutang’s cross-cultural translation of Chinese culture in relation to the problem of the cosmopolitan identity he assumed as the cross-cultural agent.

Dr. Qian Suoqiao received his PhD in Comparative Literature from University of California, Berkeley in 1996. Dr Qian had been a Mellon Fellow in the Humanities at Barnard College, Columbia University and then Assistant Professor of Comparative Literature at Hamilton College before he joined City University of Hong Kong in 2000. Dr Qian has published a number of articles in both English and Chinese, is the Chinese translator of Michel Foucault: Beyond Structuralism and Hermeneutics, editor of The Bilingual Essays of Lin Yutang (forthcoming), and is currently working on the book manuscript: Liberal Cosmopolitan: Lin Yutang and Cross-cultural Politics in between China and America.

Translating Chinese Culture to the World: Lin Yutang As a Cross-cultural Agent in America
Scroll to top