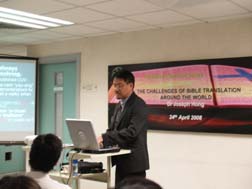 From the rendition of the sacred Hebrew text of Judaism into Greek about twenty-two centuries ago, to the translation of the Christian holy book into minority languages such as Tahitian and Gilbertese in recent decades, the enterprise of Bible translation continues to generate as much interest as passion among both non-believers and believers of the Judeo-Christian faith. No wonder the Bible is coined “Book of a Thousand Tongues”.
The PowerPoint presentation outlines the challenges faced by Bible translators – to bridge the linguistic and cultural gaps that separate today’s readers from those of the ancient world, and to distinguish nuances in certain terms of abstract theological concepts. The Bible Society movement, since its inception in 1804, has played a vital role in the exponential growth of Bible translation efforts during the past two centuries, and as a corollary, in the preservation of a significant number of minority languages threatened by extinction.

Dr Joseph Hong holds a doctorate in theology from the University of Strasbourg (France) and a D.E.A. from Ecole Superieure d’Interpretes et de Traducteurs (Sorbonne Nouvelle, Paris). He has been working as a translation consultant for the United Bible Societies for over twenty years. He travels often to different parts of the world to supervise and provide consultancy to Bible translation projects, and has helped with over thirty language projects, including the common-language Khmer, Northern Thailand’s Hmong and Mien, Myanmar’s Chin and Karen, and in the Pacific Ocean – Fijian, Bislama in Vanuatu, Gilbertese in Kiribati, and Tahitian and Marquesan in French Polynesia. He currently supervises the revision of the “Chinese Union Version” for Hong Kong Bible Society.

The Challenges of Bible Translation around the World
Scroll to top