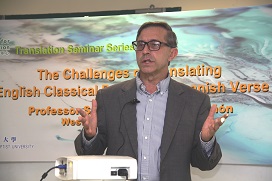 The old Italian adage “traduttore, traditore” does no justice to the valuable work of translators, especially literary translators. Rendering a literary text into another language is no easy task, and although there is general consensus that literature -particularly poetry- is best read in the original language, there are instances in which translations are necessary. In this presentation, I will discuss some of the challenges facing the translator of poetry with specific examples drawn from my own experience translating Milton’s sonnets into Spanish while maintaining the rigid structure of the original poetic form.

Santiago García-Castañón was born in Avilés, Spain in 1959. He holds a degree in English Philology from the Universidad de Oviedo (Spain) and a Master’s and Ph.D. in Spanish Literature from the University of Illinois (USA). He is currently Professor of Spanish Literature at Western Carolina University (USA), where he also served as department head for seven years. He specializes in non-canonical texts of Early Modern Spain and has produced several critical editions of previously unavailable texts, most notably Sangre, valor y fortuna, an unpublished 17th-century play by Francisco Bances Candamo, and the first world edition of Verdadera relación de la grandeza del Reino de China, by Miguel de Luarca, a previously unpublished chronicle of the first Spanish voyage to continental China in the 16th century. Most recently he has translated John Milton’s complete sonnets into Spanish verse.

Dr. García-Castañón has lectured extensively on various literary topics, from Golden Age literature, historiography and poetry to contemporary politics. He is also an award-winning poet and novelist with twenty books to his credit. His creative writing books include eleven poetry collection and three novels.