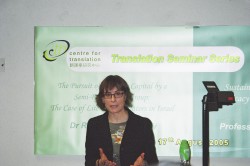 The field of literary translation in contemporary Israel can serve as a test case for examining aspects of the dynamics of a semi-professional group striving to improve its status as a profession. The Israeli case seem to be especially illuminating since, as an ambitious peripheral culture, translation – and cultural importation in general – plays in it a more significant role than in more central cultures. Unlike other service-professions, literary translators are hardly protected by organized bodies, nor are they trained by obligatory educational frameworks, and their career pattern is often loose and fragmentary. Consequently, their standing and success continuously depend on their self-promotional abilities, which make intensive use of the rhetoric of the enigmatic notion of “personal talent”. Hence, they invest much effort in constructing and publicizing their desired self-image. However, while in realm of non-literary translation increasing efforts towards institutional, “objective” professionalization of their trade are observed, literary translators tend to reject any impersonal qualification system, relying instead on a “stardom system” which emerges in this field for their claim to fame. A lively public discourse dedicated to translation in the printed media reveals the negotiation of criteria of translators’ recognition and prestige.

This paper is based on several hundreds of interviews, profile articles and critical reviews dealing with individual translators in newspaper supplements, magazines and periodicals from the early 1980’s through 2004 (Sela-Sheffy 2004, forthcoming). 20-25 literary translators stand out in this discourse as leading figures in their endeavor to establish a distinctive symbolic capital for their profession, and as those who have maximally profited from the accumulation of this capital. Three types of cultural assets are negotiated in this discourse, in accordance with the individual translator’s position, as follows: (1) Perfect proficiency in the canonical Hebrew language and its historical layers; a most safe – however rare – resource, exploited usually by senior translators to indicate an orthodox stance, but sometimes also by newly arrived to imply a “revolutionary conservatist”. (2) Profound familiarity with foreign (“important” or “exotic”) languages and cultures; generally a most valued property in Israeli culture, which nevertheless may become a risky resource of translators who are identified as bold innovators. (3) Unconventional personal disposition, bearing heavily on personality models of men-of-arts (especially as accepted in the literary field), which, in the absence of formal professional criteria, has become a major resource for ascending translators. It is this mystified personal resource, which endows individual translators with charismatic authority, that seems to be most effective in determining patterns of success in the field.

Dr. Rakefet Sela-Sheffy, born in Israel, Ph.D. (1993) from Tel Aviv University, is a Senior Lecturer at the Unit of Culture Research, Faculty of Humanities, Tel Aviv University. Her main fields are methodology of culture research, canon formation, presentations of identity, status contests and the creation of symbolic capital, pre-State and contemporary Israeli culture. Her current research clusters around questions of the construction of groups’ symbolic capital and the use of cultural repertoires in historical as well as contemporary case studies. She is presently working on [1] Trends of culture retention vs. assimilation of German Jewish immigrants in the local Jewish community in British-ruled Palestine during the 1930s and 1940s; [2] the making and negotiating of Israeli group-Identities and the pursuit of “civilizedness” in everyday popular discourse; [3] the status of translators as a semi-professional group, and strategies of constructing symbolic capital in the field of translation in contemporary Israel.
She is now on sabbatical leave, staying as a Visiting Scholar at the Department of Sociology, Harvard University (Spring 2005). More details and her publications are available from her Website: http://www.tau.ac.il/~rakefet

The Status Struggle of Translators: The Pursuit of Symbolic Capital by a Semi-Professional Group – The Case of Literary Translators in Israel
Scroll to top