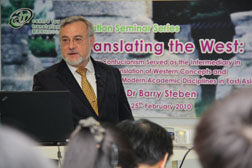 After the U.S. forced the opening of Japan in 1854, the Japanese government was in desperate need of knowledge of Western countries, particularly their system of international law, which was the basis of the treaties that Japan was being forced to sign. Thus they began to send young Japanese scholars abroad who had been trained in Dutch learning and thus knew the Dutch language, hitherto Japan’s only window on the West. Enrolled in the best Dutch universities, the students soon found that there was a sophisticated philosophical foundation for the system of international law, and that by studying that foundation they could come to understand the political and economic philosophy that lay behind the strength of modern European nation-states as well as the their systems of academic learning. On returning to Japan, these scholars and their students set to work translating the whole world of modern European academic concepts into Chinese character-compounds, making it possible for young students educated in Confucianism to quickly delve deeply into the world of Western political and scientific theory. The achievements of Japanese scholars in translating Western concepts into Chinese were soon picked up by the tens of thousands of Chinese students in Japan, and in turn they became the basis for establishing modern academic disciplines in China.

Dr Barry Steben majored in Chinese language, thought and literature at the University of Toronto, then after an honours B.A. and M.A., he studied as a foreign student at Peking University. Subsequently while pursuing a doctorate in Chinese thought, he also completed the full Japanese language program. This led him to work in Japan for three years to learn the language. Upon returning to his alma mater, he wrote a thesis comparing the Wang Yangming school of Confucianism in China and Japan, discovering how complicated it can be to translate a system of ideas into a country with a radically different cultural milieu and social-political system.
Required to teach courses on the modernization of East Asia after graduation, Dr Steben became interested in the process by which European ideas were translated into Sino-Japanese and Chinese in the 19th and early 20th centuries, transforming Japan and China into modern nation states with Western-style higher education systems, but also in the process transforming the European ideas that were imported as they became naturalized to the different cultural traditions of East Asia.

Translating Western Legal Concepts in Japan and China in the 1860s and 1870s: The Problems of “Liberty”, “Rights” and “Sovereignty”
Scroll to top