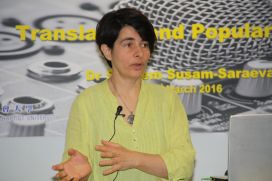 The seminar will focus on how the performance of popular music, as well as its reception, can be influenced and shaped by translation and other interlingual activities. It will first offer an overview of the phenomenon by discussing music’s various forms of materiality and the accompanying forms of translation. It will elaborate on what non-translation of lyrics may signify within a particular socio-political context, how translation and music may interact on paper (e.g. album inserts), and how popular music may be consumed on digital platforms through the circulation of translations of lyrics.
The seminar will then concentrate on a particular form translation may take within the context of popular music: interlingual cover versions. These are cover versions of songs which are sung in a different language than the original. It will be argued that the latter coalesce into a phenomenon which seems to fall between the cracks of academic disciplines. Neither popular music studies nor translation studies seems willing to own it fully as worthy of study, despite its prevalence as a means of contemporary intercultural import/export. The former, dominated as it is by an interest in Anglophone popular music and its travels across the globe, has little to offer in the way of research on interlingual remakes and prefers instead to concentrate on intralingual cover versions from different time periods. The latter, anxious as it is in demarcating its disciplinary borders around the notion of translation as ‘transfer of meaning’, finds it challenging to take up cases of interlingual give-and-take where there is little or no transfer of meaning. Examples from a particularly noteworthy case of interlingual cover versions will then be provided: a Turkish song which crossed the borders of more than 20 languages and many more countries across the globe since 1997.

Şebnem Susam-Saraeva is a Senior Lecturer in Translation Studies at the University of Edinburgh, Scotland, U.K. Her research interests have included gender and translation, retranslations, translation of literary and cultural theories, research methodology in translation studies and internationalization of the discipline. She is the author of Translation and Popular Music. Transcultural Intimacy in Turkish-Greek Relations (2015) and Theories on the Move. Translation’s Role in the Travels of Literary Theories (2006), and guest-editor of Translation and Music (2008) and Non-Professionals Translating and Interpreting. Participatory and Engaged Perspectives (2012, with Luis Pérez-González). Beyond the University of Edinburgh, she is a Steering Committee Member of ARTIS (Advancing Research in Translation and Interpreting Studies).